As a child I read about a “true” case of Spontaneous Human Combustion in one of those World Weekly News type prints that I had snagged from my parents. The article explained the bizarre condition in a manner which my young brain deemed reasonably scientific. It also posited some possible causes of SHC, including that it may be triggered by intense emotional outbursts or unrest, as many of the victims had been crotchety old people and drunks. Due to the fear the article triggered in me, that idea struck me with a terror that I had never known before. I became convinced that I would soon burst into flames. The more I feared my fate, the more likely it seemed to become, until soon I was sitting on my laundry room floor sobbing into a tabloid and my mother had to console and assure me that I was not in fact going to spontaneously combust.

But was that a promise she could really make? Am I REALLY safe from spontaneous human combustion? Are any of us?

Spontaneous Human Combustion (SHC) is the unexplained phenomenon of a human body bursting into flames without an apparent ignition source. According to proponents, there have been over 200 cases of SHC, dating back to (completely fabricated) reports of a 1400’s knight.

SHC has been widely considered an explainable phenomenon in the scientific community, and cases have been theorized to have been caused by such mundane occurrences as clandestine cigarette drops and clumsy fireplace keeping. It helps that a multitude of cases happened to women tending fires long ago and more modernly, elderly smokers.

Many ‘cases’ are of people literally found half inside a fireplace.

(Note, I couldn’t even find a reliable source for this image so Im not even sure if its real.)

While proponents will quickly quip that another peculiarity of victims is that few things in the room around them are affected by the combustion, it becomes clear when reading up on cases and looking at more photos that this also isn’t true. The fire often scorches the walls and nearby furniture, and though it is unusual it doesn’t spread further, it is not scientifically impossible.

Skeptics claim SHC is caused by the something called the Wick Effect.

“The wick effect hypothesis suggests that a small external flame source, such as a burning cigarette, chars the clothing of the victim at a location, splitting the skin and releasing subcutaneous fat, which is in turn absorbed into the burned clothing, acting as a wick. This combustion can continue for as long as the fuel is available. This hypothesis has been successfully tested with animal tissue (pig) and is consistent with evidence recovered from cases of human combustion. The human body typically has enough stored energy in fat and other chemical stores to fully combust the body; even lean people have several pounds of fat in their tissues. This fat, once heated by the burning clothing, wicks into the clothing much as candle wax (which typically was originally made of animal fat) wicks into a lit candle wick to provide the fuel needed to keep the wick burning.”

In short, it is possible, under rare circumstances, for a person to become a very macabre human candle.

Mary Reeser is known as the “Cinder Woman”. She was the first new age case of SHC which “reignited” public interest in the phenomenon. She went up in flames in Florida, 1951. All that remained of her was her left foot, still slippered, her backbone, and her skull which had inexplicably shrunk to nearly half its original size leaving scientists and doctors baffled. She was not the only one to be found this way either (see George Mott later in the post!). Reeser was an elderly woman and a known smoker, and her death could have feasibly been due to a heart attack or something akin, killing her and resulting in a dropped cigarette. The ignited cigarette would then cause the wick effect. The strange state of her remains however, particularly her skull, still defy explanation. 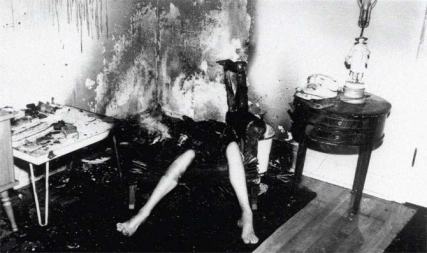 51 year old Helen Conway, of Upper Darby Pennsylvania, died sitting in a chair in her bedroom in 1964. Her grandchildren sat downstairs unaware. Like most SHC cases, the fire was already out when firemen arrived, but had been hot enough to melt a TV across the room. Helen is the focus of a documentary purported to “dis-prove” the existence of SHC. The documentary (understandably) blames careless smoking and dropped matches. However, it fails to explain the fact that Ms. Conway burst into flames and collapsed into ash in less than 20 minutes, given the last time she was seen alive. The wick effect takes a slow burn over a long time, and though it can account for many instances of SHC, this one is still a mystery.

Dr. John Bentley seemed to have combusted quite suddenly while in his Coudersport, Pennsylvania bathroom in 1966. He was 92, and though a known smoker, his pipe was still on his bed nightstand. His body burned through his linoleum floor, leaving a pile of his ashes in the basement below. The only suggestion put forth to his cause of death was that the man had dropped cinders on his robe and had gone to the bathroom to douse them, where he slipped and fell. Once incapacitated, the wick effect did the rest. It is a lot of speculation, but like with many SHC cases it is all we have.

1979 was the year that 51 year old Beatrice Oczki of Bolingbrook, Illinois, was found reduced to a pile of ash in her home. Like many cases, Beatrice was overweight, a drinker and smoker, and infirm (she wore a leg brace and had diabetes). Beatrice and the chair she had sat in were a nearly unrecognizable pile of charred remains when discovered, with only her legs remaining intact. It should be noted that to cremate bone to ash takes many hours in temperatures exceeding 2500 degrees F, while a typical house fire tends to linger around the 1000 degree mark.

In 1982 61 year old Jean Saffin sat with her elderly father in their kitchen in Edmonton England. Her father had looked away for a moment, and looked back to find Jean engulfed in flames, but sitting unmoving in her chair. Jean, who was mentally handicapped and had the capacity of a 6 year old, later died from her severe injuries. According to her father and brother, flames shot out of her mouth accompanied by a “roaring” sound. Theories abound as to what caused the woman to be consumed by flames so abruptly, and to this day the only real “explanation” posited is a stray ember caught her flammable nylon dress. However, her father was adamant that besides the distant pilot light of the stove, the kitchen was free of flames. His own pipe had not yet been lit.

58 year old George Mott, ironically a retired firefighter, was found disintegrated into his bed in 1986. Mott’s skull was also recovered, mysteriously shrunken. A multitude of plastic items around Mott’s house had melted, the water had evaporated from the toilet, and hotdogs in the fridge had been boiled in their wrappers. The fire was intense enough to cause this damage, but somehow did not catch the house. George had been a smoker, but had supposedly quit and was on oxygen and various medications. The true cause of his death was never actually determined. George was from Crown Point New York.

In my opinion many, but not all, cases can be attributed to the Wick Effect. The wick effect explanation is satisfying to me not only because of its plausibility, but because it is still really freaking creepy. Though not “spontaneous” it is more or less “Human Combustion” regardless, just the explainable kind.

However, the fact is that not all cases can be attributed solely to this, and even the harshest skeptics such as Joe Nickell admit this. The truth is still unknown, but its possible there are multiple rare contributing factors that can cause these mysterious deaths.

I highly recommend browsing this sites pages on SHC, as they seem to be well documented and sourced.

This is a good, free on youtube documentary that covers the phenomenon as well.