When I woke up this morning, Gettysburg was in Virginia.

It sounds silly, of course, to people who have always known Gettysburg to be in Pennsylvania. But for me it was a shock to discover, like Ashton Kutcher stepping out of my closet to tell me I was on the longest running episode of Punk’d. Or maybe a better example, Morpheus giving me the red pill and pushing me down the rabbit hole. I was…am…confused…shaken to my core…and questioning everything I know to be true about my reality.

You see, I learned in High School (where I took multiple advanced US History courses) that the Battle of Gettysburg took place in Virginia. MAYBE it was West Virginia (I always confuse those two). But it sure as hell wasn’t in Pennsylvania. Throughout the years since then nothing has ever come to my attention to signify anything different, and I have watched plenty of shows about Gettysburg’s history (and its ghosts).

But as I sat with my family planning our next trip, I suggested Philly and my Nana suggested Gettysburg, adding “They’re both in Pennsylvania.”

I looked at her in confusion. “…Gettysburg is in Virginia.”

I had said it with such conviction that it gave her pause, and she questioned her own knowledge. We were all quiet and contemplative a moment, then we turned to google. Gettysburg, it turns out, is in Pennsylvania. At least, it is in this dimension.

It seems to me like I have suffered from a very personal example of the “Mandela Effect”, a phenomenon coined several years back after a large number of people were shocked to discover that Nelson Mandela died in 2013, and not the 80’s or 90’s like they had apparently believed. Some even vividly remembered watching his televised funeral back in the day.

Personally I couldn’t remember him dying either time, so the effect went over my head…until another example went mainstream.

Starting in the 1960’s a series of children’s books about a family of bears learning lessons came onto the market, and made an impression that lasted long into my childhood and spawned several animated shows as well. While never a fan myself, everyone knew about “The Berenstein Bears”. 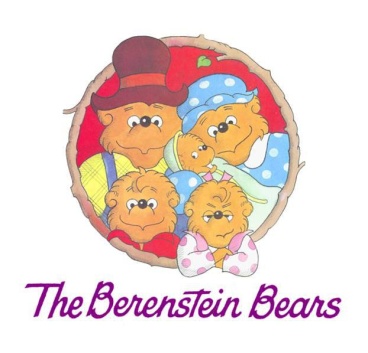 The trouble was, that’s not what they are called. The eponymous family is called the BerenSTAIN’s. And supposedly they always have been.

When the discussion first arose on Reddit, people lost their minds. Some Redditors literally clawed their way up into their attics in desperation to retrieve original copies of the books that would PROVE the spelling had been changed sometime between the late 90’s to early 2000’s, only to be horrified to discover that their entire lives were apparently a lie. When I first told my mom the “truth” about the bears, she looked like she had learned what they keep in the secret tunnels under the Vatican. Like most others, she refused to believe me at all until she had literally googled it herself. As far as I know, no one has ever uncovered an “original” copy of the books with the “correct” spelling, something that makes perfect sense to the Berenstain family, who wrote the books in question.

But why do so many people share the same false memory?

Some truly believe the name was changed in some sort of vast conspiracy to make the characters sound “less Jewish”. Others are content to believe most kids are just dumb and can’t read so good. I however, know for a fact that if there was a book about characters with the word “Stain” in their name, I would have found some way to turn it into a poop joke as a child.

An obvious explanation is a sort of “memory hysteria” in which word of mouth and assumptions cause the general population to believe in a falsehood that isn’t corrected in an obvious way until a long while later. People thought it was spelled that way and communicated it to others and then to others and so on like a massive game of telephone.

And the fact is, no one can prove that’s not what’s happening. You see, the only proof that it was ever spelled a different way lies in peoples memories, which have been proven time and again to be incredibly flawed and unsettlingly adept at completely fabricating “truths”.

But a more disturbing and interesting explanation ties the idea of the Mandela Effect to something that is being studied by some of the brightest minds on planet earth: Quantum Mechanics.

You see, there are real scientific geniuses out there right now who are studying, believe in, and are trying to prove the existence of other dimensions. And if they think it’s possible, why shouldn’t we?

The idea is called “Many World’s Theory” and it posits that there are an infinite number of parallel dimensions beside the one we reside in. In other words, for every different outcome to an event there is another dimension. So perhaps you reside currently in the dimension where you put on a blue shirt today, but there is another universe identical to this one in every way except that you chose to wear a red shirt instead. That example illustrates a small, nearly unnoticeable change. But what about events with higher stakes, ones with far more consequence?

This is where the idea of Many Worlds intersects with another theory known as “Quantum Immortality“. Now I’m not a quantum physicist so theres plenty about all this I can’t explain, but the gist of it is this: If you die in one dimension, your consciousness will combine with an adjacent dimension. Basically, you won’t realize anything is different, but the dimension you just left will now be dealing with your death. The dimensions can have differences so minuscule you’d never notice, and because your life will be (nearly) exactly the same, you never will.

But what if you DO notice?

Many Worlds and Quantum Immortality have been used to explain occurrences such as deja vu and the Mandela Effect. Perhaps instead of our memories being faulty, our worlds have actually changed subtly around us. Or…WE are the ones who changed. Because these theories would mean that in our current dimension, the Berenstain Bears have always been spelled as such. We just remember differently because we are remembering the dimension we used to reside in.

But how could such a vast number of people all have come from the same alternate universe into this one? The most obvious explanation would be a large scale disaster that killed most or all of the population of earth sometime in the late 90’s or early 2000’s. The residents of that dimension’s consciousness-es (or “Souls” if you prefer) would have then merged seamlessly with a parallel timeline where everything was exactly the same except the apocalypse did not happen…and one family of author’s names was spelled slightly different.

It may seem fantastical or far fetched, but again I say, Quantum Mechanics is real and there are scientists working right now to prove that alternate dimensions are real, so it’s less crazy than it sounds.

So assuming all this is true, could there be a possible explanation to the Berenstain mystery? What catastrophic event could have happened that killed so many and fits the time frame?

On December 31st 1999, I was eight years old and at the annual New Years party at a family friends house. I was with my parents and my best friend (it was her family’s house) but even as an ignorant child, I was terrified. The rumor was, when the clock struck midnight, the world might end. The adults were laughing and drinking and pretending everything was fine, but the truth was, the world was caught in a sense of unease as the clock neared midnight and the new millennium approached.

In retrospect it might seem silly, the fear that gripped the world. After all, what was the worst that could happen? Some ancient computers stop working because they aren’t programmed to handle the date? Well not exactly.

The fear was that some very important computers, namely the ones controlling the worlds nuclear weapons and those warning us of nuclear attacks, might fail and thus literally end the world. Politicians and scientist had been scrambling in panic trying to avert any chance of a crisis, but everyone held their breath the night that ball dropped.

But nothing happened. Or at least, nothing we remember. The next morning everyone had a good laugh at how foolish we had all been, to think that a simple change of a minute hand would be our great undoing. But I will never forget where I was when the year changed over. I was hiding under a blanket, trembling, praying that we wouldn’t die.

But what if we did?

And what if I died again earlier today, and woke up in a dimension where my life was the exact same except here, Gettysburg was a town founded just a little further north? The strange thing is, on my way home from Boston, my mother and I were nearly in a car accident caused by a large chunk of ice falling off a truck in front of us on the highway and slamming into our windshield like a brick. Miraculously there wasn’t even a crack left behind. At least…not in this dimension.

4 thoughts on “The Universe Next Door”