After discussing ideas for a family outing back in August, my mother, nana, and myself settled on what seemed to be the obvious choice; we were to go ghosthunting.

The three of us have long been into the paranormal, passing that love on for three generations now. But was also love adventures and learning, which made a trip to some interesting Massachusetts sites very appealing to us.

My nana had learned of a few places in Western MA from friends at cards. They spoke of an haunted train tunnel, and abandoned, prison camp, and a legendary cemetery where demons lurked.

So we rented a hotel for a night and drove out to start our journey in Clinton MA.

The Clinton Tunnel was a functional rail tunnel near the Wachusett Dam from 1903 to 1958.  It now lays abandoned, set back only a few feet in the woods but hidden from the road. The only clues to its whereabouts are the massive footings of its former 133 foot tall viaduct, crossing the Nashua River across the road.

We found the path leading up a hill through some brush to the Clinton Tunnel, but we felt the place long before we saw it. Despite the searing August heat, a heavy coldness encased us once we stepped into the woods, flowing down the hill from the tunnels entrance. Logically I surmise this was due to a cooling effect of wind passing through the rock wall tunnel and being cooled down before flowing out our end, however the effect was no less eerie with an explanation.

When we arrived at the tunnels entrance we were more impressed than we were expecting to be.

Despite being abandoned, it had not been forgotten. The outermost portions were covered in decades of layers of graffiti. The tunnel itself was quite large, but it didn’t appear very long. This proved to be a dangerous optical illusion.

Clinton Tunnel is actually 1110 feet long, and once you get about 15 feet in you are in pitch blackness, so thick that the flashlight on my Iphone was useless. My family and I decided we would have to turn back and come again a bit more prepared. We went and bought several flashlights, and my mother and nana brought their coats back this time (it was quite cold in the tunnel itself) and then we went on for take 2 of our adventure. 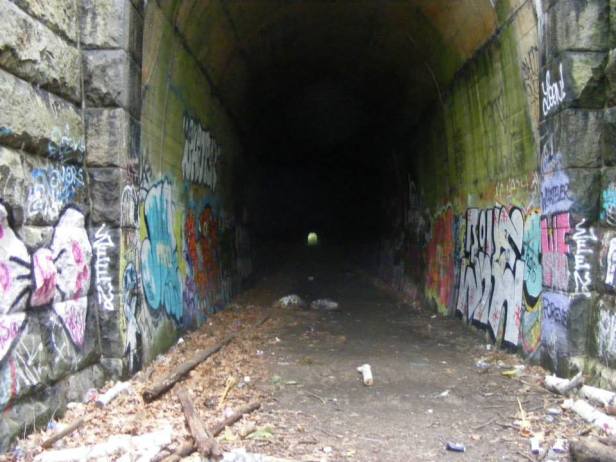 This time I was determined to make it all the way through the tunnel. As we walked, we could hear things moving in the darkness ahead, scurrying away from our footsteps. Rats. I reasoned, but the hairs on my neck stood on end.

“This is not good I don’t like this.” My nana repeated for maybe the fortieth time. She was very uneasy in the tunnel and it had taken some convincing to get her along, despite her usual enthusiasm for the paranormal.

Not far into the tunnel the graffiti trailed away into plain stone walls. It was too dark here for the artists to even bother apparently. About halfway into the tunnel, the cut stone walls gave way to ragged rock.

Now it felt like we were in a long cave. Water dripped from the ceiling and ran down the craggy walls, pooling at the sides. In some areas the main path itself was flooded, leading to careful stepping around several inches of water. As I pointed my light around I began to notice not ghosts, but frogs. The tunnel was home to hundreds of frogs, swimming in the pools and sitting on the rocks. They didn’t seem worried about spirits at all. All this time the end of the tunnel didn’t seem to be getting any closer than when we had begun. Then suddenly, we were there.

The tunnel let out in a beautiful area of forest. Due to more water we couldn’t go an further, but it was beautiful to glimpse. There was a little bit more graffiti on the sun-touched walls of this side of the tunnel, and I recognized a small white figure that I had seen at the entrance as well. 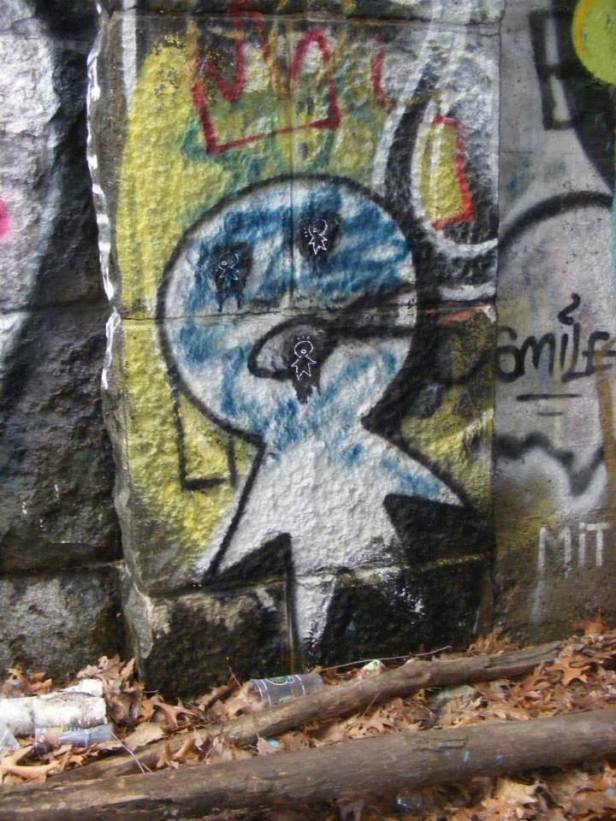 I couldn’t help but be reminded of the Kodama, tree spirits, from Princess Mononoke.

Was this figure a graffiti artist’s calling card or tag? Or was this a picture of a creature that had been seen in the tunnel?

The tunnel itself is often called “haunted”, although most eerie places gain that reputation regardless of actual experiences. Kids pass on urban legends about places like the Clinton Tunnel and soon it seems the only ghosts that dwell there are the ones we’ve made.

Several myths about the place abound, such as the story of a young boy being hit by a train and killed in the tunnel, or the body of a murdered girl being found there. However there is nothing to back up these claims.

Regardless of that, there could still be something in there. I took this photo and caught several intriguing looking orbs in the tunnel.

Looking closely you can even see that they have nuclei, as if they radiate energy. Anyway, they don’t look much like bugs or dust to me.

Despite the photo and the unsettling feelings in the tunnel, we didn’t actually have any paranormal experiences in Clinton. But we certainly had fun.

Next up on our quest was the Rutland Prison Camp, or what was left of it.

Rutland Prison Camp was constructed in the deep woods, and was a place for the state to put prisoners to work farming. There were cows, chickens, and crops tended to here. It was closed in 1934 due to the area apparently being part of the Wachusett watershed. Today, 59 inmates remain buried on the grounds in unmarked graves, with only a plaque in the middle of the woods to commemorate them.

The Prison Camp remnants proved to be a bit more challenging to find than the roadside Clinton Tunnel. It involved driving on a narrow dirt road into the middle of nowhere in fact, and then driving the wrong way down several more roads before I found this old map and set us straight.

The only parts of the prison left to see are the old vegetable cellar, the solitary confinement cells, and a couple other nearly collapsed ruins at the pumphouse and hospital.

We found the vegetable cellar first. In fact once we were in the right place we managed to drive right up to it.

That’s my mother by the way. The vegetable cellar was in the best shape of the ruins, with an intact roof, but it was covered in graffiti and of little intrigue. Next we stumbled upon another structure. This was more decayed, equally graffiti-ed, but far more interesting.

We had found the remains of the solitary confinement cells. The cells were incredibly small, and it was chilling to step inside and imagine a human locked in there. 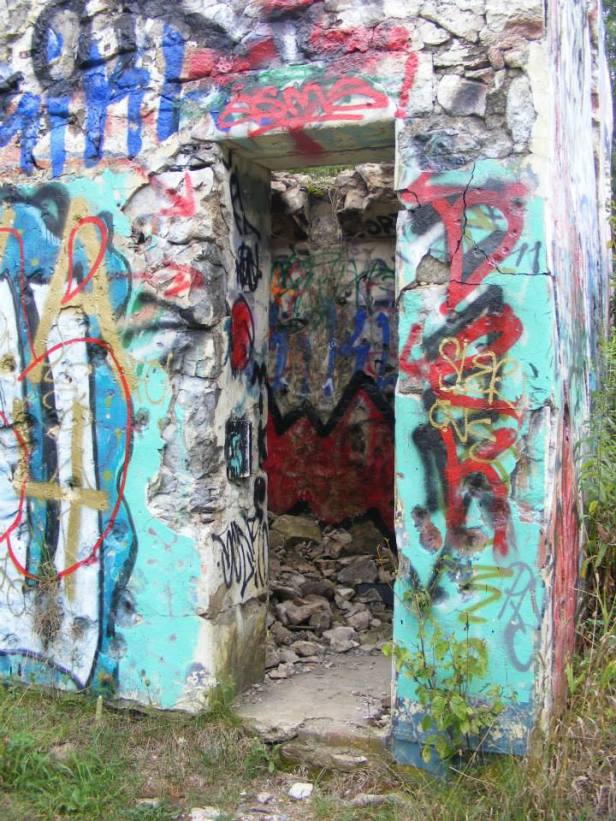 After poking our head into each cell we wandered around some more, but couldn’t find much else of interest in the area. Again we had found the site and found the history, but the ghosts were evading us.

Our final stop on the journey was the Spider Gate Cemetery in Leicester Ma.

Spider Gate Cemetery was rumored to be a satanic place, cursed, and filled with horror. It was said you would have to pass through seven gates to get to it, and each gate would unleash a new terror such as ghostly whispering. By the final gate you would be in the presence of demons.

In all actuality the legends are a load of baloney.

Spider Gate Cemetery is actually called Friends Cemetery, and it is a Quaker resting place, still in use today. 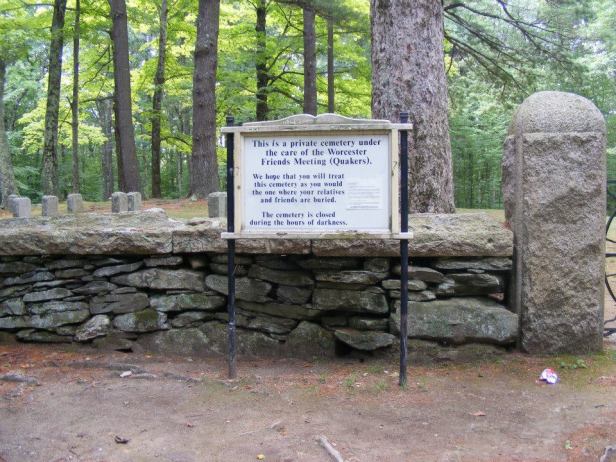 It got its name from its gate, which apparently looked like a spiderweb to some weirdo.

Looks more like a sea urchin to me. They are supposed to be the rays of the sun. Regardless, there are certainly not 7 (or 8?) gates. You pass maybe two gates to get to the cemetery proper, but those are really just to keep vehicles out. The cemetery is set far off down a dirt road (bring your hiking shoes kids) and through gorgeous forest and fields cut through by a bubbling creek. The cemetery itself is anything but satanic; it was in fact incredibly beautiful and peaceful, as we all agreed.

The trees filtered the light so that everything was golden, and being in the middle of nowhere it was calm and quiet. We found no evidence of evil, and how the place got such a bad reputation I’m not sure.

We left feeling content despite not having found any ghosts. What we DID find was a lot of interesting Massachusetts history about the Wachusett area. And to us, the memories plus that, were more than enough.

6 thoughts on “Hunting for Haunts in Western Ma.”